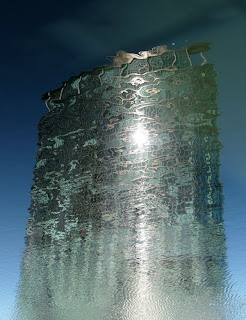 Public Water is an audio-visual installation project concerned with exploring the nature and status of water as urban public space in London, UK, and Melbourne, Australia. To qualify, ‘public space' is defined broadly as space to which the public is freely admitted and while 'urban public space' is usually considered in social, physical and architectural terms, most large cities also contain large bodies of water such as bays, rivers, canals, and so on. The idea of these as public space, is much more ambiguous.
In recent years, with the escalation in official concern about the likelihood of terrorist attack, there is perceived to have been an increase in the enforcement of restrictions on the rights of the individual and their activities in public space.  However what is assumed to be public space is often privately owned with its own independent rules above and beyond those in common law governing its use. Typically such places are also policed by security agents engaged by or on behalf of the owners.
Among the activities under scrutiny has been the capture of still and moving images. While there is no legally enforceable restriction on photography in most genuinely public spaces in the UK outside of the provisions of the Counter-Terrorism Act 2008, in private places to which the public has access, such activities can be, and often are forbidden. One place where this is the case is the Canary Wharf estate in London’s former Docklands, where I was on one occasion requested to refrain from shooting video.
London’s Docklands have been a model for global urban development and Melbourne in Australia has followed suit, regenerating and repurposing its own Docklands as spaces of business, retail and leisure, using local government, planning and corporate agendas in ways that parallel and echo those of London.
The conceptual and aesthetic strategic conceit that I have arrived at for this project as a result of these and other observations, has been to capture moving images of place reflected in water. The simple speculative formulation is that if there are restrictions in capturing the image of the place, what is the status of the image of that place as reflected in water?
Water as public space, water as medium: when reflections on water are photographed what and where is the image? Water becomes a medium reflecting and reproducing (albeit distorting) an image. By then rotating this image through 180°, I am attempting an optical illusion that further problematises the image as an image ‘of’ something in perhaps a gently subversive way. Most of this activity has been located broadly in urban and suburban landscapes, increasingly concentrated in and around the private/public space of the Docklands in both cities.
My interest in these two places comes from having lived in both and, now back in London, retain a strong connection with Australia in general and Melbourne in particular. This manifests itself in continuing cultural and personal connections with the place and the phenomena that links the places (such as the UK/Australian moving image landscape screening project Figuring Landscapes). The docks are also an environment that link the two places historically as the place of departure from one and arrival at the other, sites of trade and migration, once liminal transitional spaces, transformed through the imperatives of capital as new post-colonial ideologies demand other forms of globalised interests.
The Public Water Blog traces the development of the project towards an audio-visual installation exhibition planned for Melbourne, Australia and London, UK, documenting sketches, notes, research references and other material. Visit the blog for the most recent activity on the project.

As the project develops more pages will be added with details of other aspects of the project. The recently added Selected References page provides a bibliography, filmography and lists of other resources and references. In the future there will be information about the anticipated form and media used for the exhibition when it is realised. These, like the notes on this page, will be extrapolated from material posted initially on the blog.

The methodology for the project is speculative, it develops incrementally, when realised as an 'artwork' it will be more a trace of processes that becomes an object in itself, than an investigation of phenomena. To that end the material presented here is done so in the spirit of being a kind of open sketchbook or journal, an essential complement to the work, without neccessarily being 'the work' itself.
The Twitter feed will be used for live writing in the near future.
Steven Ball
http://www.steven-ball.net
last updated 7 July 2011