Across a footbridge over the Maribyrnong river, up to Smithfield Road, a small storm water run off canal beside the highway.
0 comments

Walking further north along the bank of the Maribyrnong the incongruous sight of a Buddhist temple under construction and a giant statue of Guan Yin appears adjacent to the area known as Newells Paddock. 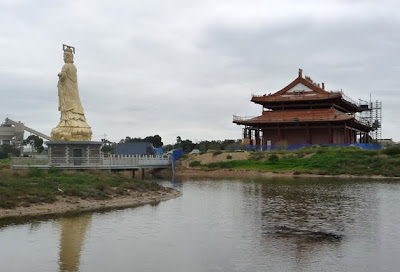 Beyond the temple a suburban railway line bridge crosses the river.  Under the arches of the bridge shallow water reflects graffiti.

Starting at Footscray Wharf at 1pm, a notice by the river in front of the Footscray Arts Centre informs with historical photographs and text about the history of the river:
Footscray Wharf. Remnants of an industrial past.  In the 19th Century the Maribyrnong was known as the 'Saltwater River'.  Its west bank was a hub of activity with extensive wharves reflecting the river's importance as an industrial transport route.
The sky is cloudy grey, the river blue grey green: a saltwater river. The medium breeze creates consistent ripples.  The river’s steely surface seems reflective, but in the grey uniform light it is unyielding.  Starfish cling to submerged sections of mooring pole.  Sounds of present industry and its trucks reverberate from across the river, across the Footscray Road bridge, across Hopetoun Bridge...
0 comments

Towards a nomenclature of water

Having never read it, but having long been aware of its existence and perhaps pertinence to this and other of my projects, before I left London I bought a copy of Species of Spaces and Other Pieces by Georges Perec.  It is a wonderful book, full of Perec’s observations of otherwise unremarkable places and suggestions as to how to explore, examine and describe them.
I have noted in Species of Spaces correlations with his interests in formal concerns and those of some of my own approaches. For example early in the book he quotes Paul Eluard’s Children’s song from Les Deux-Sèvres from Poésie involontaire et poésie intentionelle (itself a title that I’d like to adopt):
In Paris, there is a street;
in that street, there is a house;
in that house, there is a staircase;
on that staircase, there is a room;
in that room, there is a table;
on that table, there is a cloth;
on that cloth, there is a cage;
in that cage, there is a nest;
in that nest, there is a bird.
This bears a close resemblance to the lyric of my song Aroundabout. I have never knowingly read the Eluard poem, and of course it’s possible that, like me, he was influenced by the old traditional English song The Green Grass Grew all Around which was reworked with a fecund twist as The Maypole Song in the film The Wicker Man.
Perec’s descriptions of bedrooms also reminded me of my description of a Brussels hotel room in Direct Language 3.
Of course there is always the anxiety of influence, something that I’ve been conscious of in many forms in developing this project, but also something I’ve decided not to be overly concerned about, and it’s something I’ll deal with in another post.
There is something of a descriptive zoom, or a pan, a cinematic descriptive in Perec’s writing as it shifts focus from the microscopic, the macro view, travelling across space; as he writes: “force yourself to see more flatly”.
There are interesting and often oblique connections to Public Water.  In writing about street numbering conventions Perec discusses the Parisian model where odd numbers are on the left, even on the right, relative to the direction of the street, but then a third determinant being a fixed point that dictates the direction of the ascension of the numbers.
“Streets parallel with the Seine are numbered starting upstream, perpendicular streets starting from the Seine and going away from it (...one might reasonably suppose that analogous solutions have been thought up for other towns).”
Have they?  Well a cursory glance at my wholly inadequate street map of Melbourne suggests that this might be the case in relation to the River Yarra, but the map is not detailed enough to be definitive.  If it is the case, what is the meaning of this numerical grid placed upon the physical grid that Hoddle superimposed on this township in the distant colony in the middle of the nineteenth century: a persisting, perhaps permanent marker of colonialism?
Perec suggests that  “...rather than visit London, stay at home, in the chimney corner, and read the irreplaceable information supplied by Baedecker (1907 edition): ...If one is in the vicinity of London Bridge, one should take advantage of every available moment to visit the port and its environs, the ships arriving or departing and the enormous traffic in the docks.  For those wishing to enjoy a grand spectacle, unique in the world, the excursion to Gravesend is especially recommended.”
Perec quoting from Cosmicomics by Italo Calvino: “... so the world and space seemed to be the mirror one of the other both minutely stored in heiroglyphs and ideograms, and in each of them could equally well be or not be a sign: ...one scratch out of eight hundred thousand on the creosoted wall between two docks in Melbourne...”.  I am looking for that scratch.
Listings. Typology. Perec is concerned with species of spaces, categories of observations, I am concerned with categories of water as public space, and I have looked in vain for a way of categorising ‘species of water’, beyond the purely generic (“creek”, “canal”, “river”, etc) in terms of describing types of waves in order to standardise observations relating to the same conditions in various places, other than the likes of “calm”, “choppy”, “flowing”, “tidal”, etc.  Maybe this nomenclature is enough for my purposes; conventional sources tend to range from the ultra-scientific, physics-based descriptions of waves and particles, etc, to surfing vernacular.  Perhaps there are better terms, maybe meteorological ones, but I’ve yet to find them.
2 comments

Starting at Waterfront City ferry terminal, around the boardwalk with calm water protected from the wind below. Out in Victoria Harbour the medium breeze makes the water more choppy: medium ripple.
I buy a chocolate chip and vanilla ice cream: single cone, two scoops.
Continuing northeast along the promenade, the medium ripple waters reflect the Docklands buildings.
0 comments