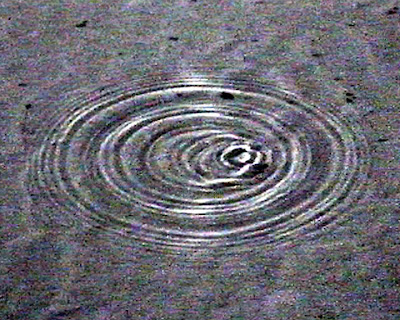 Periscope 180° super 8/1992
At sea when it began: three months of water, and then down the west coast of Australia, nowhere else to go.  Three months of water and now a land-locked mast.  A western setting sun.  By the wharf, down at the docks, the pipes, the pipes are calling another aching load… and every day after that I went to the beach.
Pools Between Land super 8 - video/1990
Still water, pooling water, not spilt like on land, collects in depression.
m-dot.report video/1991
… residents of the village of Elwood and other areas around Post Philip Bay, Melbourne, Australia, reported seeing a flying object hovering at about 250 metres above the water, 500 metres offshore at Point Ormond.
Harmonic Maheno (Harmonic Three Three) super 8/1991
As we drove north up the eastern side of the Island we came across the rusting hulk of a ship wreck; one of the more accessible of many such wrecks dotted around the Australian coastline.